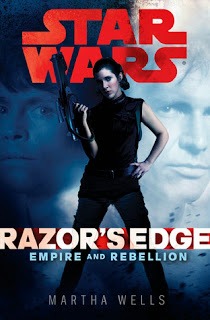 I was super excited when I read a story about the Empire and Rebellion series. Especially because the first book was going to be a Leia focused story written by a female author! I’m barely into the book and I’m already in love. Martha’s prose captures the feel of the original trilogy while adding some facets to Leia’s personality that I’m really enjoying!

I had the opportunity to ask Martha a few questions about the book, Enjoy!

I'd always been a Star Wars fan since I first saw the movie in 1977, when I was 13 years old.  I wrote fanfic and met a lot of good friends through Star Wars fandom, so I was very happy to be offered the chance to write a book in the Empire and Rebellion series.  The period between A New Hope and The Empire Strikes Back has so much potential for great stories, and it was the part of the trilogy that I always leaned toward when I was writing fanfic in high school and college.  I'd always wanted to do something with space pirates so that was the first idea I suggested when doing the outline.

2) Princess Leia is such a wonderful role model for girls and women interested in Science Fiction. What were your reactions/emotions towards her when you first watched Star Wars?
When I was growing up, there weren't a lot of adventure stories in children's books that were aimed at young girls.   So in Star Wars it was just great that Leia was there at all.  And I thought it was really Carrie Fisher's performance that got across how tough and determined she was.

3) What facets of Leia's personality did you find important to showcase in Razors Edge?
I wanted to show her abilities as a leader, and as a diplomat and a negotiator, but I also wanted to show the strength and ruthless edge that allowed her to survive.

4) I was excited to see Han was a part of this story as well. What do you think of  Han & Leia as a couple ?
I've always really liked seeing them together, they were my two favorite characters from the beginning.  I loved the way they argued as equals, that neither one gave the other any slack.
5) Avoiding spoilers (if possible) what was one of your favorite line or lines of dialogue in this book?
Terae wasn't nearly as eager as Kelvan.  She said, "If one of the ships in orbit reports our departure to Viest, she would still have time to order them to fire on us.  And she told the captain she would put a bounty on us."Leia said, "She can't if she's dead."

Thanks to Martha and the great team at DelRey Books
Be sure to check out the Star Wars Books Facebook Page for up to the minute news on releases and great contests.
And of course the Star Wars Website

Happy Reading! May the Force Be With You!
Email Post